“MSers” and their friends had gathered at the resort on Sunday evening for dinner and a presentation on “Overcoming MS and Thriving in Life”. Dinner was great and the talk was excellent, with a lively exchange of ideas. Emphasis was on the benefits of physical and mental exercise, good eating and mindfulness. MS Cure Fund events are different like that; they generally focus on wellness in the individual with MS rather than listing drug therapies. 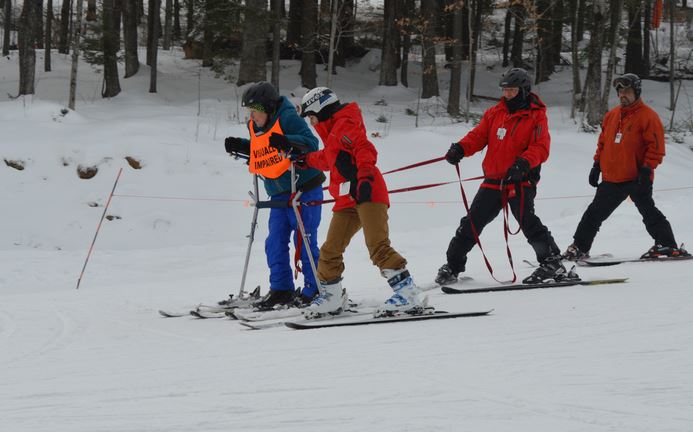 Monday dawned cold and cloudy, with intermittent snow showers. It had rained heavily all day Sunday and there was a lot of ice under the light dusting of new snow. After a good breakfast in the hotel, participants were bussed to the Maine Adaptive Sports & Recreation Ski facility and each received all the equipment they would need and a one-day ski pass. This year the number of skiers had increased to 12, from 3 then 5 in previous years, so this whole process seemed like organized chaos!

A few words about Maine Adaptive. They are an organization that has been in existence for about thirty years. Staffed mostly by volunteers, and funded by donations, their sole purpose is to offer skiing and other sports to those who would not normally consider trying sport because of physical or mental disability. Each skier is evaluated carefully and matched with specialized equipment and trained volunteers, and then taken out on the slopes. These volunteers are generally people who love to ski and who seem to delight in any accomplishment made by their charges. I would urge anyone curious about Maine Adaptive Sports & Recreation to look them up on the web and watch their YouTube video in particular.

I’ll focus on three skiers who were there, since they all friends and rode up together from the Worcester area.

Marisa is a 45-year-old woman. She has prominent right leg weakness, and fatigue. She’s had MS for 15 years and had skied only once before. That time, she did not have a good instructor and wasn’t properly prepared to ski. She wasn’t told how to stop properly so she kept falling. Her legs and back eventually hurt so badly that she retreated to the lodge and vowed never to ski again. This year her friend had talked her into trying again, so she came along, still uncertain. On Monday her teacher was a charming man in his 80’s, who helped her put her foot in the ski and patently explained the mechanics of skiing. He fastened a belt around her waist and attached a lanyard…and she was off! When she found the “magic carpet”- a sort of conveyor belt sliding up the hill- too difficult, he switched her to a snowmobile taxi that took her up the hill, then she skied down. Marisa loved it! She skied all day and, after she came into the office, could be heard planning her next trip back…

Scott is a 51-year-old man who has had MS for years. Scott’s MS problems (fatigue, vertigo) are compounded by the fact he lost his right arm above the elbow years ago. He skied as a child and again successfully as an adult at Mt. Sunapee with his children, before MS. He, also, was talked into attending this event. He wasn’t sure he wanted to risk skiing again. On Monday, Scott barely needed any teacher, he had a great time skiing higher and higher slopes; it all came back to him. After lunch, however, his guide suggested they try the top of the mountain. Scott was game and up they went. Unfortunately, it was up here that Scott got tired and “wiped out” twice, injuring his remaining arm in one fall and his right upper leg in the next. After his second fall Scott realized he was too tired to ski down and he requested, and got, a toboggan ambulance down. When he was warmed and rested in the Maine Adaptive office, Scott told his friends he was still glad he came.

Maggie is a 62-year-old woman who has had MS for 30 years. She has fairly profound left arm and leg weakness, balance problems and permanent double vision. She normally walks with a wheeled walker. Monday was a repeat event for her, she had been there the year before and loved it. Last year she’d been given skis and a frame with skis on it. She’d also been given two charming volunteers to accompany her. One skied behind her with a tether and the other alongside. After two or three trips down the bunny slope they’d taken her up higher on the mountain and she’d loved it! On Monday she was given the same apparatus. Because of the icy conditions however, she was told there would be no going higher today. Still she has great fun on the bunny slopes and spent all day skiing!

The three friends all rode back to Massachusetts together and chatted about their day. They all felt exhilarated by the experience and grateful to MS Cure Fund and Maine Adaptive. They agreed they’d all be back next year – and they’d bring their friend Anna along!