Exercise in MS: Personalized Approach for 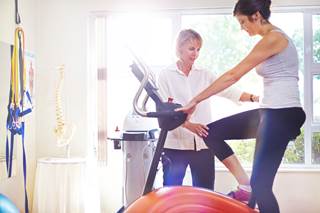 Patients with multiple sclerosis (MS) and their clinicians have historically approached the idea of exercise with hesitation, as the obvious benefits to general health have long been complicated by the perceived increase in morbidity and negative impact on disease activity. New evidence, however, suggests that these concerns are far less significant than previously thought and that people with MS should be given exercise training appropriate to their individual disease status.

As Stephen Krieger, MD, a neurologist at the Corinne Goldsmith Dickinson Center for Multiple Sclerosis in New York told Neurology Advisor, “Exercise helps with muscle strength, dexterity, and overall fitness and is an important component of cardiovascular health, optimizing body mass index, and maintaining stamina. People from all ends of the disability spectrum can, often with the guidance of a physical therapist, develop an exercise routine that suits them and is feasible.”

According to Patricia Bobryk, MHS, PT, MSCS, ATP, a certified MS Specialist at the Comprehensive Care Center of Central Florida in Orlando, Florida, and chair of the International Organization of Multiple Sclerosis Rehabilitation Therapists, many of the symptoms often identified as MS progression following exercise may really be the result of a deconditioning effect and not an exacerbation of the disease course. Patients experience fatigue from exercise and may feel a decline in general function that is attributed to MS, when really it is just deconditioning, “and we can [have an] impact [on] that,” she said.

A revised focus on exercise training for MS is advocated by the findings of a number of recent reviews, all showing benefits to cardiovascular and muscular fitness and improved quality of life in MS.1-4 This change in attitude has been slow in coming, according to Herb Karpatkin, PT, DSc, NCS, MSCS, a private care MS practitioner who serves major MS centers in New York City. He referred to a large-scale study by Petajan et al5 reported in 1996 that showed that, contrary to prior belief, exercise training resulted in improved fitness and had a positive impact on factors related to quality of life. “Not only was there no worsening of MS, a lot of patients improved in the same way that other patients improved. That was probably a turning point. It took a while for that to translate into true rehabilitation,” Karpatkin said.

Managing the Limitations to Exercise in MS

“One of the roles of the therapy team is to devise an exercise program that somebody can be successful at and feel good about, and that they can progress through,” Bobryk noted, pointing out that a large barrier for patients who have a history of previous exercise or sports are often frustrated that they cannot replicate that performance. “Depression is a big factor in this. It's hard to motivate them to stay consistent. We know that it's a cumulative effect and we let them know that the more you do, the more you're going to gain.”

Karpatkin agreed. “The fundamental problem is that almost all persons with MS are limited in the amount of exercise they can perform [because of] heat intolerance and fatigue,” he said. “We need exercise to get better, but exercise leads to fatigue because of thermosensitivity. If they get too hot, their symptoms worsen, and they are unable to exercise at a high enough volume to achieve the improvements they need.” These observations make it clear that specific exercise programs are needed for patients with MS that target cardiovascular and muscle fitness to improve mobility, while preventing fatigue and overheating.

One of the most significant mantras in the approach to exercise in MS is to “focus away from working to exhaustion,” Bobryk said. His clinic has adopted the philosophy of intermittent exercise, taken largely from Karpatkin's research published in 2012.6

“Diminished strength is a common finding in MS; however, building strength via continuous repetitions of resistance exercise is difficult, in part owing to fatigue,” Karpatkin said. “If an individual with MS performed intermittent repetitions (eg, resting at the onset of fatigue and resuming when recovered, as opposed to continuing until fatigue prevents further work), a greater number of repetitions could be achieved, potentially resulting in the realization of greater strength gains.”

“When people do intermittent exercise — also called interval exercise — they're just taking breaks,” Karpatkin explained. “The breaks allow the core temperature to decrease, and that allows them to perform a greater amount of exercise. The more you rest, the more work you can do.”

Dr Krieger noted that in clinical practice, it is hard to say how well patients adhere to exercise routines, “but I try to intervene by reiterating the importance of specific exercises to help address specific physical limitations or deficits, and the recommendation is that they stay goal oriented.”

Karpatkin recommends that all MS rehabilitation therapists become familiar with techniques such as intermittent exercise, cooling, and energy conservation, which have all been shown to be effective in improving exercise in persons with MS. “The best exercise is the one you're going to do,” Bobryk said. “Our focus is health and wellness now and early intervention to make sure we get folks on a good solid path early on,” she added.