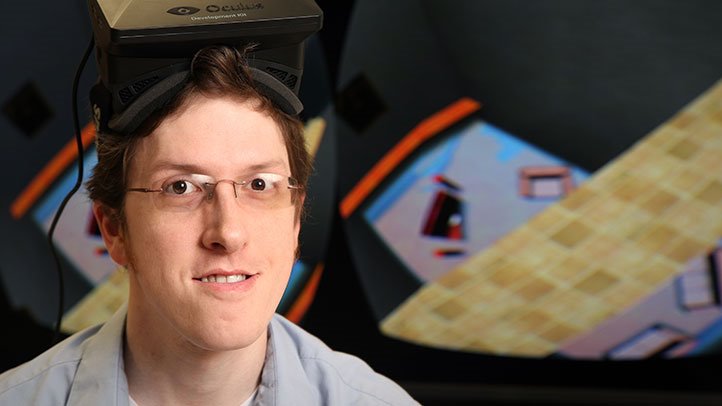 No one would disagree that John Quarles, PhD, is a really smart guy and that he's using his smarts for the greater good. Diagnosed with multiple sclerosis (MS) in 2005, this associate professor of computer science at the University of Texas in San Antonio (UTSA) is applying his technical expertise to a virtual reality video game that helps people with MS stay physically fit.

Dr. Quarles directs the SAVE lab at UTSA to research not only virtual reality (VR), but augmented reality (AR) — a combination of virtual reality and real life — and games to make the world a better place, he says.

To play, the user dons a waterproof smartphone and wears a dive mask that also sports a phone, which allows him to see a virtual underwater world. Once in the water, he does what he can to keep away from a virtual great white shark — or give it a good punch in the nose. The system has sound effects for when the shark gets a bite of the player.

It's a fun but challenging game that allows a user with MS to exercise without getting overheated, a symptom that can frequently occur "on land." Quarles says aquatic therapy also helps with balance issues, something that affects many with multiple sclerosis.

Quarles received financial help from the National Science Foundation — $240,000 — for ongoing game development and has applied for additional research grants for this project.

Danger of a Very Real Kind

Quarles recently had his own narrow escape, but not one involving a shark.

He says he was the "1 in 100,000" who developed a rare complication from the infused MS medication Lemtrada (alemtuzumab). Called autoimmune hemolytic anemia, the complication occurs when the body's immune system makes antibodies that attack its red blood cells, causing their numbers to drop.

It landed Quarles in the hospital, where he remained for six weeks. But after 22 blood transfusions, he's recovered and eager to do more research.

In the past, Quarles’s medication regimen has included Rebif (interferon beta-1a), Copaxone (glatiramer), and intravenous immunoglobulin (IVIG) therapy. But none of them made a difference for him, he says.

Quarles is not currently taking any MS disease-modifying drug.

Numbness, Optic Neuritis, Then a Diagnosis

Like many people with MS, Quarles began to notice symptoms a few years before his diagnosis. His older sister also has MS, and his symptoms were similar to hers, he says, but otherwise, there was no real family history.

"I had some numbness in my feet, one of my knees gave out randomly, and one day in graduate school, I woke up with a 'foggy' right eye — optic neuritis," he says.

The signs became more obvious when he was 23. When an MRI failed to confirm his MS, his neurologist diagnosed it on the basis of the optic neuritis and because of the sibling connection.

Although he’s taking no MS medication at present, Quarles does use antidepressant medication, a selective serotonin reuptake inhibitor (SSRI). He's grateful, he says, not to have other cognitive issues.

"I was just pretty unmotivated, even though the rest of my life was really great," Quarles says.

Citing his "most obvious" issue as mobility, Quarles says he can walk, but he must manage spasticity in his legs. "They're fairly weak, and generally, the right half of my body is weaker than the left." He remains committed to regular exercise, though, five days a week.

"I do this to counter neurological damage that occurred from previous MS exacerbations," he says. "I'm constantly working to make myself stronger. I don't have drop foot as much anymore. Exercise also improves my mood."

His routine includes lifting weights for strength and walking on the treadmill. "It's hard for me to get good cardio, because my legs give out before the heart rate goes up. I can't really run," Quarles says.

He's also a composer and plays a plethora of guitar styles, from Americana to surf rock. His MS caused him to have to reteach himself to play guitar, but he wasn't fazed.

"Both hands took a hit, and relearning took two months," he says. "Some things I'm better at, some I'm not as good at doing. I'm probably better at playing lead guitar, not as good at rhythm guitar. I had to retrain my hands: Rehab is a lot of repetitive motion."

RELATED: How to Exercise With MS: Advice From a Physical Therapist

Sharing the Benefits of VR With Others With Disabilities

A firm believer in the power of games to provide more than just fun, Quarles is working with the Children's Rehabilitation Institute of TeletonUSA in San Antonio to explore more possibilities.

"The kids love video games more than all of us," he says. "I could probably impact a lot more people."

To that end, Quarles is designing a new game that's shark-free (to reduce the fear factor), with aquatic rehabilitation expert Paula Geigle, PhD, of the University of Maryland School of Medicine in Baltimore.

"It's a frog jumping around on lily pads, catching flies," Quarles says. "It's fun for kids with neuromuscular problems like cerebral palsy. We're trying to prototype it, pilot it, and get it right for the kids in San Antonio first, then to expand for kids all over the world."

Quarles has also encouraged students in his video game development class to use VR devices to improve accessibility for veterans who want to play video games. The class is partnering with the San Antonio nonprofit Gamerz 4 Vets to help veterans rehabilitate with gaming.

Quarles sees the partnership as a win-win. According to UTSA, the students will deliver their video games to specific veterans during the holidays this year — maybe the perfect gifts that really will keep on giving.